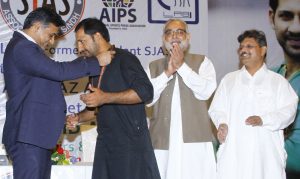 On the occasion, Sarfraz thanked SJAS for presenting him Gold Medal and congratulated all SJAS members for organizing such a great event.

Sarfraz said that Rashid Ali Siddiqui (late) was a great human being, his services for sports in Sindh was respectful.

Sarfraz Ahmed further said that encouragement, especially in our country, guided players to do well in future.

Sarfraz has said, “I am hopeful to perform well in the upcoming tri-nation series against Australia and Zimbabwe”.

He said that there is no dearth of talent in Pakistan in all sports.

Other sports-related players should be encouraged like cricket, he added.

Answer to a query, Sarfraz said that Zimbabwe is a good team in their home ground.

There is no weak team in T20 cricket, he added.

Earlier, Sindh Sports Minister and Patron SJAS, Syed Junaid Ali Shah addressing on the occasion said that “Sarfraz Ahmed is our legend”.
He said that our best wishes with Sarfraz always adding that the encouragement by SJAS conferring Sarfraz with the gold medal is very encouraging and should continue to promote other players too.

“SJAS has also conferred other young athletes by awarding them is a unique step and I hope they continue this trend for the promotion of sports”, he added.

Having being reappointed as caretaker minister, I assure all the sportsmen in this province, to come up with special programs so as to encourage not only the sportsmen but also the sports loving people.

SJAS also gave shields to their members Shahid Satti, Shahid Ali Ansari, Arshad Wahab and Javed Iqbal for their hard work in the field of sports.

Sindh Information Minister pledges all out support for...

Sjas Pakistan , is the Sports Journalist Association of Sindh working for the betterment of Sports in Pakistan specially in Sindh.